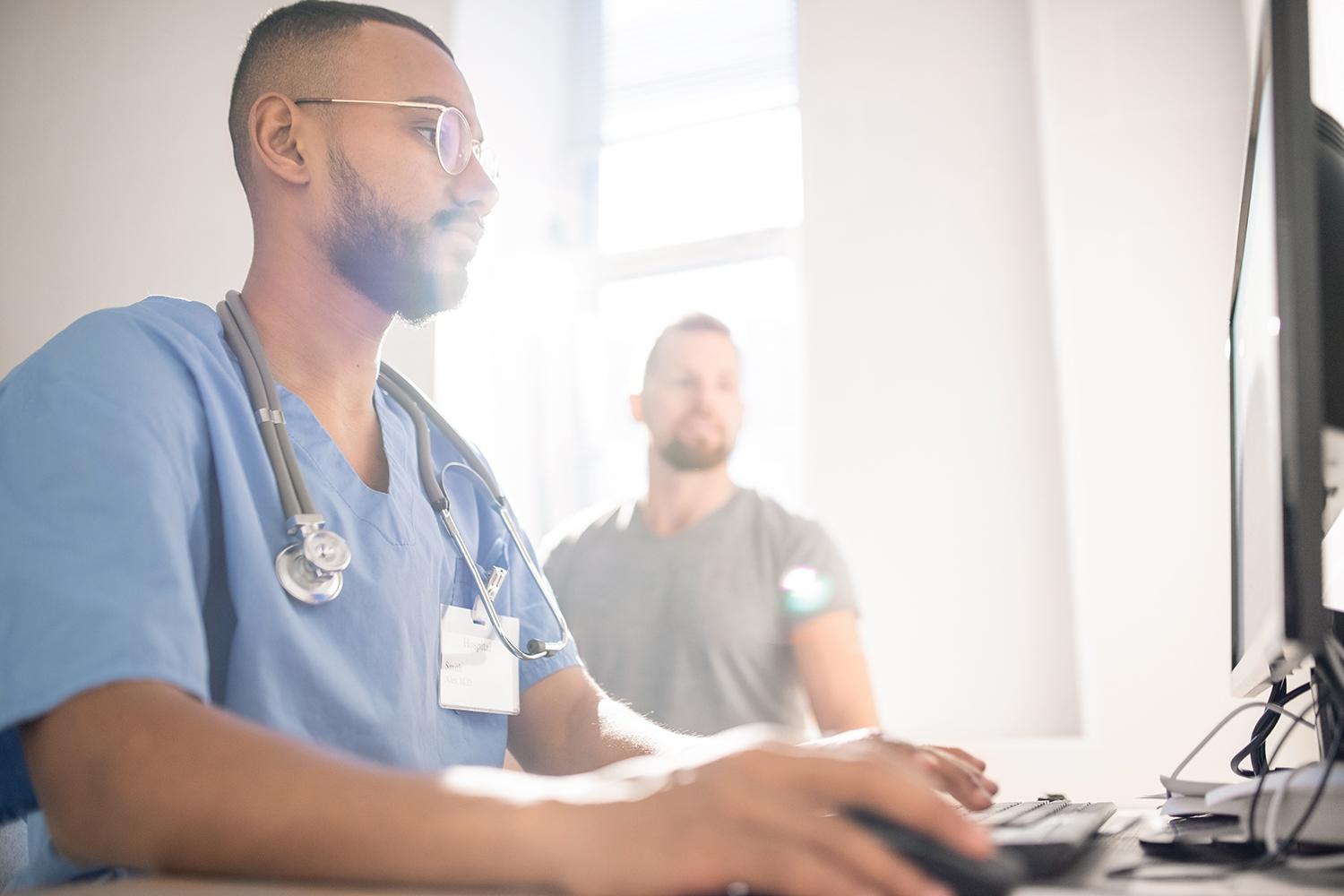 Documentation of strokes is tricky.

My personal provider’s MyChart has become pretty sophisticated. In preparation for an outpatient visit with my doctor, I have to review many aspects of my health history, including past medical history, medications, and allergies, and I have the opportunity to request edits. The provider must then review and verify my requests, and only they are empowered to do the revisions to the record itself.

I often request removal of acute problems and either replace them with “history of” codes or allow the diagnoses to drop off entirely. I had wrist pain years ago that turned out to be a ganglion cyst, and it has resolved. Neither diagnosis is currently appropriate. I did not have a melanoma continuously for six years; I had Mohs surgery to remove an early melanoma, and thankfully, currently am cancer-free, and should only carry a diagnosis of a personal history of melanoma.

This is advanced coding for providers who are not, and do not aspire to be, coders. They refer to chronic conditions as “(past medical) history of (e.g., heart failure),” and they don’t resolve diagnoses because they don’t even know that “personal history of” is an option. If they are using an electronic health record (EHR), they type in a few letters (e.g., M-E-L-A), and the computer spits out ICD-10-CM codes with the word “melanoma” in the title. They probably also get “MELAS syndrome” and “melanin disorders” listed in the mix, too. The provider just picks one that approximates what the patient has and moves on. They do not want to spend excessive time perusing all of the offerings to find the perfect ICD-10-CM code. And I am not sure that would be an excellent use of doctor time.

Hierarchical Condition Categories (HCCs) are also calculated according to the provider documentation of the patient’s medical issues (as is the DRG assignment). If HCC capture is done from a non-curated problem list, GIGO (garbage in, garbage out). The problem list grows longer and longer if no one is deleting and assigning end dates appropriately. No one has perpetual acute appendicitis. They undergo an appendectomy, and the appendicitis is eradicated. Acute appendicitis should then fall off the record.

Whose responsibility is it to manage the problem list? Should specialists delete signs, symptoms, and unspecified conditions once they have made a definitive, specific diagnosis? If specialists add to the list, is it acceptable for the primary care physician to remove those problems when they are historical? Should doctors be doing this at all? If so, when? When does a diagnosis become historical?

On Sept. 16, a report by the U.S. Department of Health and Human Services (HHS) Office of Inspector General (OIG) was issued, titled Incorrect Acute Stroke Diagnosis Codes Submitted by Traditional Medicare Providers Resulted in Millions of Dollars in Increased Payments to Medicare Advantage Organizations (https://oig.hhs.gov/oas/reports/region7/71701176.pdf). The essence was that beneficiaries who transitioned from traditional Medicare to Medicare Advantage (MA) came with inappropriate acute stroke codes affixed to their risk factor scores, resulting in approximately $14 million of extrapolated overpayments.

Documentation of strokes is tricky. ICD-10-CM codes can be very informative if someone takes the time to provide all of the elements. First, you must indicate what the etiology of the cerebrovascular accident (CVA) is (e.g., non-traumatic subarachnoid, intracerebral, subdural, or epidural hemorrhage or cerebral infarction). Then, the specificity, especially for cerebral infarction, is unwieldy. Maximal granularity includes whether a cerebral infarction occurs due to a thrombosis or embolism, and of which artery/arteries. Best practice is to catalog the deficits even when the stroke is acute, but the code changes after the index admission [e.g., G81.-, Hemiplegia and hemiparesis (flaccid vs. spastic; laterality and dominance) as opposed to I69.35-, Hemiplegia and hemiparesis following cerebral infarction (including laterality and dominance)].

Acute stroke codes are only appropriate during the acute event, such as in the doctor’s office when the patient is experiencing acute right-sided weakness with aphasia, for which an ambulance is summoned, or during the inpatient admission for the acute CVA. After the acute incident has resolved, the patient either has neurological deficits (residua or sequelae) or they do not. The latter is coded with Z86.73, Personal history of transient ischemic attack (TIA) and cerebral infarction without residual deficits, or Z86.79, Personal history of other diseases of the circulatory system, for history of brain bleeds. If there are deficits, and the provider makes the necessary linkage, a “sequelae of” code should be assigned signifying the specific residua.

An acute stroke today has HCC implications for next year, because it is a prospective model. If the year goes from Jan. 1 to Dec. 31, a stroke on Jan. 2 counts for the entire subsequent year (not the year in which the stroke occurred). After the acute incident, the provider should precisely and correctly transition to a sequelae of cerebrovascular disease or a Z86 code. Certain sequelae, such hemi- or monoplegia, have risk-adjusting implications. In fact, motor residua are even more risk-adjusting than acute stroke. There is only a nullification hierarchy between hemiplegia/hemiparesis (HCC 103) and monoplegia and other paralytic syndromes (HCC 104). Acute stroke and risk-adjusting sequelae will have additive risk adjustment factors (RAFs).

Residua due to a previous stroke get coded with I69.-. I69 codes stemming from a previous stroke can be utilized simultaneously with a new and different acute stroke. However, deficits presumed to be due to an acute stroke during the acute stroke encounter are coded as sign/symptoms, and not with an I69 code; a G81.- code is utilized instead. The provider must link the deficit with the stroke to be able to compliantly select the sequela code (e.g., the verbiage of “right-sided weakness due to previous cerebral infarction” in a right-handed individual yields I69.351, Hemiplegia and hemiparesis following cerebral infarction affecting right dominant side). The residua should be documented repeatedly as long as the deficits persist and are clinically significant. The coding of the resultant neurological deficit needs to be encouraged because hemiplegia/hemiparesis falls into HCC 103, whether it is G81.- or I69.-. Coders must be taught that the deficit is not considered integral; it adds detail, information, and dimension to the underlying condition.

Examples (the etiology of “acute stroke” is cerebral infarction, for the purpose of these tables):

The OIG report found that only two of 582 (0.3 percent) of cases that had acute stroke diagnoses were supported by the documentation. Conversely, 99.7 percent did not have evidence of acute strokes. The findings stated that 285 of 580 (49.1 percent) of enrollees actually had a “history of stroke” diagnosis and should have had a Z86.- code. The financial differential between erroneously falling into HCC 100 (acute ischemic stroke) versus no HCC for a personal history was reportedly $1,826 (from the Centers for Medicare & Medicaid Services/CMS to the MA organization for the transferred enrollee). In 16 of 580 cases (2.8 percent), the sequela of hemiplegia (15 of 16, 93.4 percent) or monoplegia (1of 16, 6.6 percent) was determined to be present, and CMS credited the MA organizations with underpayments.

Even without being able to review the records on my own, it is my opinion that there probably were many inappropriate acute stroke codes affixed to patients, incurring a significant cost to Medicare in the population investigated. I think it was less likely a problem with documentation; it was more likely an issue of selection of the wrong ICD-10-CM code. I also believe it was likely done out of ignorance and not malevolence. If it wasn’t because of inaction to convert an acute diagnosis to an historical one, it was probably on the basis of propagation via copying and pasting without mindful editing. Some of the cases were likely historical transient ischemic attacks, which use the same Z86.73 code as an infarction without residua. It is conceivable that the documentation made it difficult for the auditors to ascertain that.

This exemplifies why there is such a growing need for “outpatient clinical documentation improvement (CDI).” Knowledgeable coders should be scouring the diagnosis and problem lists, and generating queries to ensure accuracy of the record.

I would recommend that all outpatient diagnoses of acute stroke, i.e., I60.- to I63.-, be reviewed prospectively to ensure that they are appropriate. There should be evidence in the documentation that the patient is currently having a CVA, in the doctor’s office. This is likely to be uncommon.

Similarly, all CVAs in the same code range found as a secondary diagnosis during inpatient stays should be assessed. Did the patient actually have an acute stroke, concurrent with the principal diagnosis, or incur a CVA during the admission? If neither of those is the case, then there should probably be an I69.- or Z86.- code instead. Hopefully, your professional coders are aware of the difference and are choosing wisely.

If your hospital elects to do a retrospective study and your coders have not been distinguishing accurately between acute and prior strokes, you may need to self-disclose and return money. It may be better than letting the OIG discover it and slam you with penalties.

Initiate an education program for your providers. “Acute” is for now, “history of” is for old, resolved, or no longer active conditions. Help them earmark common I69.- and Z86.- codes in their EHR as favorites. Perhaps set up an alert until you have them trained (“are you really sure you want that I63.- code for an acute stroke on this encounter when no CT or MRI was done?”)

If you work for a risk adjustment entity, I don’t recommend capturing acute stroke solely from emergency department documentation. It is advisable to determine the final discharge diagnosis. In the ED, we often see patients in the throes of a transient ischemic attack and treat them as a potential acute stroke. It is only after evaluation that acute stroke can be established or ruled out.

Finally, if you find a provider who is intentionally doing this to increase HCC payments, contact your compliance department. As David Glaser would say, that would be really risky business.

Erica Remer, MD, FACEP, CCDS, has a unique perspective as a practicing emergency physician for 25 years, with extensive coding, CDI, and ICD-10 expertise. As physician advisor for University Hospitals Health System in Cleveland, Ohio for four years, she trained 2,700 providers in ICD-10, closed hundreds of queries, fought numerous DRG clinical determination and medical necessity denials, and educated CDI specialists and healthcare providers with engaging, case-based presentations. She transitioned to independent consulting in July 2016. Dr. Remer is a member of the ICD10monitor editorial board and is the co-host on the popular Talk Ten Tuesdays weekly, live Internet radio broadcasts.
PrevPreviousThe Need for Facility Coding Guidelines
NextCMS Announces the Resumption of Medicare AuditsNext